Touch to Navigate
Send The Fire > Formation > Soul Food > Not My Power: Resurrection

Not My Power: Resurrection

“With that same spirit of faith we also believe and therefore speak, because we know that the one who raised the Lord Jesus from the dead will also raise us with Jesus and present us with you in his presence.” (2 Corinthians 4:13-14)

Where does your confidence to talk about what you believe come from? What is it that you know that keeps you from being afraid to talk about God’s strength in your clay pot of a life? 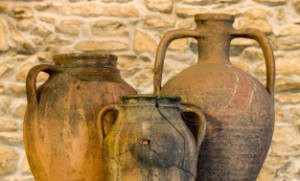 Paul spoke because he believed in resurrection. If this is the only life we have, every injury, every illness, would be a great loss. Getting older, getting sick, moving closer to death – all of life would be a tragedy as we marched slowly and inevitably toward the end.

But Paul was not afraid to suffer – or talk about his suffering for Jesus’ sake – because he believed in the next life, the one that doesn’t end. The one that doesn’t hurt. He believed he (and all believers) would be raised from the dead and find themselves standing with God, new and whole and finished.

He wasn’t afraid to use this life up on the way to that one. Are you?

Think: What are you afraid of losing in this life? What can you lose here that you won’t get back – and far better – in eternity with God?

Pray: As a Christian, thank God that you know that the one who raised Jesus from the dead will also raise you with Jesus and present you in his presence.

The post Not My Power: Resurrection appeared first on PlanetWisdom.