Send The Fire > Formation > Soul Food > Like Jesus: No Fear

“. . . without being frightened in any way by those who oppose you. This is a sign to them that they will be destroyed, but that you will be saved—and that by God. For it has been granted to you on behalf of Christ not only to believe on him, but also to suffer for him . . .” (Philippians 1:28)

Back in the 90s, a brand of clothing called No Fear got hugely popular. Part of the attraction was the idea behind the logo — live to the extreme in sports, in life. Don’t be afraid of pain or breaking out of tradition. Don’t conform. Live on the edge. 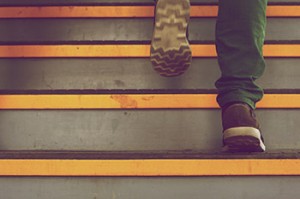 In his letter to the Philippians, Paul described how Christians can live without fear. We saw the first two steps in yesterday’s devo: live like the gospel matters (with integrity) and stand shoulder-to-shoulder with other believers (as one person). That makes sense.

The next step is harder: expect to suffer. People who see pain as normal are not afraid of it. Athletes push through the pain of working out knowing they’ll have pain from it the next day, too. Boxers expect to take punches. Christians should expect to suffer for Jesus, Paul wrote.

Think: Does expecting pain make pain less scary? Do you know of any Christians who have suffered real persecution for their faith?

Pray: Ask God to help you live without fear in the way Paul describes here.

Do: Go out and buy a “No Fear” energy drink. Wait, I’m not supposed to say that unless they send us money. Drink something else. But don’t be scared.