Hear and Do: Whoa Tongue

“If anyone considers himself religious and yet does not keep a tight rein on his tongue, he deceives himself and his religion is worthless.” (James 1:26)

We’re fond of saying Christianity is not religion; it’s a relationship with God through Jesus. And that makes sense. We usually think of religion as man trying to reach God. Christianity is God taking the initiative to redeem humans, adopting us as his children. 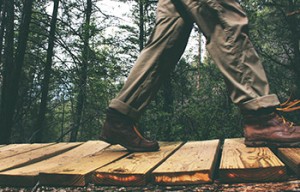 But James is writing to a religious people. He doesn’t want them to be content in mindlessly following all the rules and regulations of their practice. He wants them (and us) to ask if their worship is changing them. And the number one measuring stick for change in humans is the words that come out of our mouths.

Think: Does your “faith practice” work? Are you finding yourself changed in the way you talk, in the words you choose?

Pray: Ask God to help you see how your genuine relationship with him is genuinely changing you to be more like Jesus.

Do: Listen to how the people in your life talk this week. Notice anyone whose religious faith is or is not making a difference in their choice of words.

The post Hear and Do: Whoa Tongue appeared first on PlanetWisdom.