Naaman, the hero dying from leprosy, is sent by the king of Aram to Israel in search of a cure. Naaman was desperate. Why else would he embark on this journey on the word of one young slave girl? It’s the only hope he has left of beating this ugly disease. 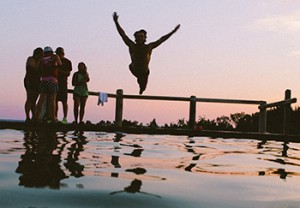 Notice two things: First, many people will not come to God until they are out of other options. How loving and generous of the Father to use our desperate circumstances to drive us into His care — and then to care for us as only He can.

Second: Naaman assumes that if there is someone in Israel with the power over leprosy, he’d be living at the palace. He’d be a rich and powerful person. But the rich and powerful king of Israel doesn’t have what Namaan needs. The dying hero was looking for the right answer in the wrong place.

Think: Have you ever turned to God with a big problem only after trying all of your other options first? Do you believe God ever uses our desperate moments to get our attention and give us great gifts?

Pray: Thank God that He uses our hard times to help us learn to trust Him more.

Do: Think about asking a wise older Christian how God has used hard times in her life to help her trust Him more.